Skip to content
Posted by Michael Kaufman on February 5, 2011

It has been captivating to watch the sudden and massive upheavals in Egypt sparked by the uprising in Tunisia and, in turn, speaking protest movements in Yemen, Jordan, Sudan and beyond. 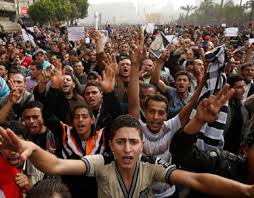 I do not wish to speculate on outcomes.  Perhaps countries will descend into bloodshed as those who desperately hope to preserve the status quo take desperate measures.  Perhaps the opposition will be outmanoeuvred by interim governments and cosmetic changes.  Perhaps armies will take over.  Perhaps fundamentalist forces will use their discipline and cohesion to come to power (which, in Egypt at least, is unlikely.)  Perhaps the heterogeneity of these movements will prove to be their undoing.  Or perhaps they will lead the way forward towards more democratic cultures with more deeply embedded  structures of human rights and a drive for greater equality.

One question we can begin to answer is why the protests have spread so rapidly from country-to country and why, at least in some countries, the scale of protest so quickly ballooned.

Commentators have repeatedly said that these mass protests are a response to years of totalitarian control, to police who have sown terror and corruption with impunity, and to ever-growing poverty alongside glittering wealth.

Such are undoubtedly true, but this misses an essential point.  After all, these have been the conditions for many years in these countries; these are the conditions in much of the world.

I believe people rise up when they know that change is possible.

Until then, sheer physical and  emotional survival depends upon clawing out a living or carving out small islands – specks! – of security and happiness.  For some, it depends on thinking that whatever horrors or hardships you face are your terrible lot in life and that your strength is measured by your endurance.  For most, it is the knowledge that any show of resistance will bring punishment, perhaps terror, perhaps death.

But a glimmer here or there, a moment when a thousand people successfully resist can sometimes speak to ten thousand, and those ten thousand shout to a million:  change not only is needed, but change is possible.

Thus the success of the uprising in Tunisia – success, at least in ousting a hated dictator – quickly spread its message to Egypt:  You can do this too.